we're gonna make it after all

http://silverfinofhope.wordpress.com
Posted by Chrissy Johnson at 7:02 AM No comments:

Who are you in Canton, Ohio? Speak up, frequent visitor.
Posted by Chrissy Johnson at 7:49 AM 2 comments:

If you still peek here
to look for new, shining things
please change your bookmark

xoxo
Posted by Chrissy Johnson at 2:58 PM No comments:

Hello lovelies. Am no longer posting here. You can find me at:

Love.
Posted by Chrissy Johnson at 11:56 AM No comments:

I am in the process of moving most of this site here. Visit there if you wanna.
Posted by Chrissy Johnson at 12:32 AM 1 comment:

Up until recently, all of the men in caves brought their food with them into the deep and the cold and the dark. That too would change soon, when a small company store was to go in adjacent to Adam's office. The families presented their own set of needs, and the wives didn't always want to shove their way into the dining hall kitchen for loaves of bread or jugs of milk for their incessantly hungry children. And sometimes the men in caves wanted something their warm wife had made for them, in their warm kitchen, for them and them only. They had placed that apple in the bag only for them, their soft hands had sliced the cheese that rested on the bread that was just the kind of bread that the men liked. And they would say so to one another, Leftover cornbread, even better the next day...and they would smile and there might even be a small note in the lunch, Have a good day...love you...xoxo. Plus, most of the men were from other places, places with their own colloquial recipes, and they could talk a bit about Home as they peeled wax paper away. The men didn't get that from the company cook, even though he really could cook, sometimes much better than any of the wives.

Adam had been to the mouth of the tunnels, and was shocked at the immediate January that escaped, his thin arms covered only with a cotton button down shirt shivered. His shudder deepened as he thought of how it must feel once the mine car traversed over the inner hill, over the darkened earth, and disappeared. The portals to that foreign world, that gnome world, that shadow cavern world that the other men entered in the mornings and exited in the early evenings were high up the mountain. Walking up there took a good fifteen minutes, though by standing near the dormitories, dining hall, and mine office deep in the valley it appeared they were a short climb away. Adam squinted up there often, amazed at how different that world was from the one down below, the world he preferred, though he often ruminated joining their ranks, and whether they would even let him, should he ask. It seemed if you entered the mines you were given keys to the Valley  in exchange for the risk of losing an arm or an eye in a blast. You used to practically be given one of the town women of hire upon your arrival, before the families came. Adam was a little bit in awe of how easily the men shifted from the arms of these tarty, powdered women into the arms and hearths of their wives, brought up almost in haste, after word got out of the swarming whores around the mine. They used to buzz up the rough road all the way from Palmer, like inebriated birds of paradise in their blue and purple dresses, perched on top of almost rusted out Model T's. Their dresses were always either dusty or wet once they arrived at the mine, the pass that led there could have as many as three or four weather patterns in its giant range on a summer day (they usually didn't come up in the Winter - the mine was ghostly still then).

Adam never went to meet them when they came. He felt too ashamed for them. They were pretty, and they looked kind, all a bit like the lonely aunts that looked after him when he was in school. They had never married, these lonely aunts, and seemed to circle around him like hens who laid empty egg after empty egg; unsure of what he'd do next, should they feed him or let him fend for himself? These women for hire looked as though they wanted to take care of him when they happened to look his way on the Friday nights when they traversed upward.  On the rare occasion they walked near his office, peering in and smiling a bit sideways at him as he tried not to look back. As he stuck his Roman-shaped nose deeper into a ledger or a novel, he secretly breathed in deeply, and could smell their Woolworth's lotions and powders as they clunked in cracked black high heels on the small deck outside the door. He didn't want them to take care of him in any way, just as he didn't want those lonely aunts worrying over him.  He could cook his own food as he always had done and he could take care of his other, rawer needs on his own, too, just as he always had.
Posted by Chrissy Johnson at 4:28 PM No comments:

Labels: Adam, Alaska, something else

He's finally told me his name

Adam certainly wasn't an imposing man. His glasses were the commonly seen gold framed and round, nothing flashy  or insinuated, but of course they gave him an air that men in glasses had, that scholarly air that made those in their presence feel like the one wearing the glasses had at least some of the answers. Adam was bookish, he was bright, he was educated, but not as much as others thought he was. He was good at math and always had been; his mother used shake out a bag of marbles and ask him How many marbles, darling? How many marbles does one need to make thirty if you've but nineteen? And Adam would scrunch his tiny five year old face up tight for an instant before brightening and practically shouting, Eleven! and would then bound like a puppy, rushing head first towards his mother, so proud he was of his quick answer. Math wasn't simply easy, it was like breathing to him, try as he might, his mind forced him to run up figures when it was in rest.


Like so many men with glasses who were educated, Adam was also quite thin. His considerable height on top of this caused him to look a bit like a praying mantis unfolding, especially when he got up from a seated position. His hands were long, his feet were long, his arms swayed a bit when he walked. But he wasn't unattractive in the slightest, there was something  that seemed to flow through him, something peaceful but with an undercurrent of heat. He hadn't known many women but those who he did pass time with tended to become a bit obsessed; perhaps their mothers had whispered that common phrase "Still waters run deep" to them when they were girls. Meaning that the quiet, smart, peaceful ones who always seemed to be deep in thought were the ones with the most important things to say, or do. Adam had a lot on his mind most of the time, and he certainly was quite still, most of the time.  Not lately, though. Lately he'd been jumpy, fidgety, the very opposite of still.
Posted by Chrissy Johnson at 10:09 PM No comments: 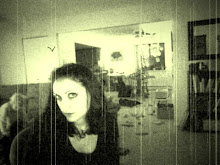 Chrissy Johnson
I'm the co-editor and co-creator of Far Away Literary Magazine (http://farawayliterarymagazine.com) Also find me at http://silverfinofhope.wordpress.com